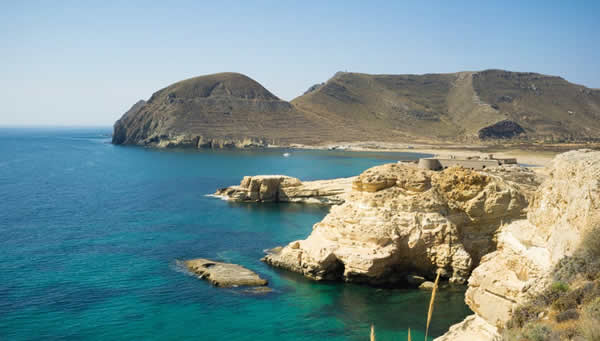 The Costa de Almeria is the northernmost province in the region of Andalucía in south east Spain.

The region enjoys over 300 days of sunshine each year and is one of the driest areas of Europe.

There are some outstanding areas of beauty, some of which have been used as movie locations – Indiana Jones, Lawrence of Arabia and many spaghetti westerns were filmed in Almeria. The Cabo de Gata Natural Park features forests, cliffs and deserted beaches.

Travelling South from San Juan along the rugged coastline you will reach the sandy beaches of Puerto Rey and the bustling town of Vera, from here you will pass through the fishing villages of Villaricos and Garrucha then on to the livelier resort of Mojacar with its whitewashed old village and vibrant beach resort.

This wonderful region boasts a contrast of scenery with a combination of golden sands, rugged coves and arid desert landscape all set against the backdrop of spectacular mountains with their ever changing colours throughout the seasons.

The city of Almeria is the areas capital, and is topped by the awe inspiring Alcazaba, a large Islamic fort which provides a good viewpoint of the famous cave quarter, and fortified Cathedral.

The main airports serving the region are Almeria, Murcia and Alicante. The road network is excellent making travelling easy via the main auto route which runs along the coast of Spain.