Mojacar is made up of two areas, Mojacar village or “Pueblo” and Mojacar Playa. 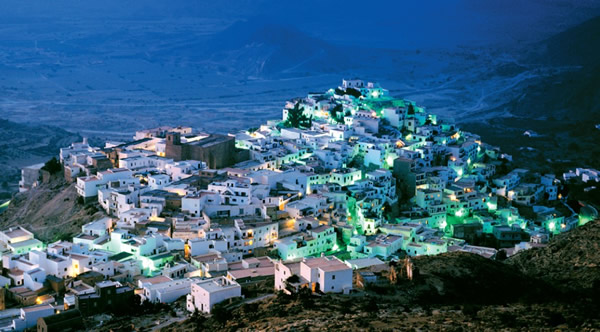 The old Moorish village or “Pueblo” is perched on the hillside overlooking the coast. Mojacar Pueblo is a fascinating maze of winding streets with whitewashed houses stacked one on top of other in a ‘sugar cube’ effect, where time has stood still for hundreds of years, since the Moors built occupied this part of Spain. The heart of the village is the main square, the Plaza Nueva where a tempting array of bars and restaurants can be found alongside shops offering local crafts and souvenirs. Sit and enjoy a chilled Sangria or beer and take in the amazing views of the coast and surrounding countryside – in winter you can see as far as the snow capped Sierra Nevada Mountains. Mojacar Pueblo is well worth exploring, with a surprise around each corner. The village comes alive during the ‘Fiestas’ ……. The colourful and traditional Moors & Christians in early June and the lively San Augustin Fiestas at the end of August. 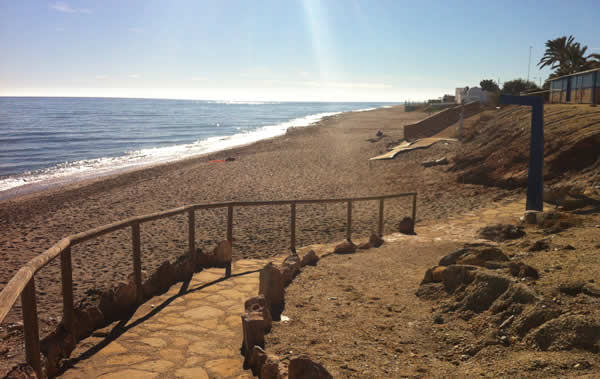 Mojacar Playa is the liveliest section of the coast. Although popular with both British and Spanish holidaymakers, this pretty beach resort has not been spoilt by high rise development and still retains much of its laid back Andalucian charm. Mojacar Playa boasts a wide selection of bars and restaurants catering to all culinary tastes, beachside cafes or “chiringuitos” offering freshly cooked fish and paella. For the “night owls” during the summer months one can enjoy the atmosphere of the popular beachside night club. Water sports are in abundance, with banana boats, donut rides, water skiing and scuba diving on offer. For those who prefer to keep their feet on terra firma, the bustling commercial centre will satisfy the needs of any “shopaholic”! 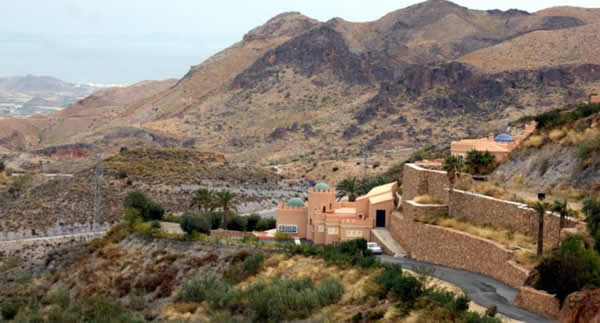 Built in a typical Moorish style, Cabrera is a small attractive development perched high above the coast some 20 minutes from the coast at Mojacar. One of the most striking features that you first notice on entering the “village” is the brightly coloured domes atop the terracotta houses.

With quiet cul de sacs and beautifully manicured gardens, Cabrera is a relaxing and tranquil place to live. Cabrera itself has a handful of eateries however, the golf resort of Cortijo Grande is minutes away by car and the nearby town of Turre has a large selection of bars restaurants and supermarkets. 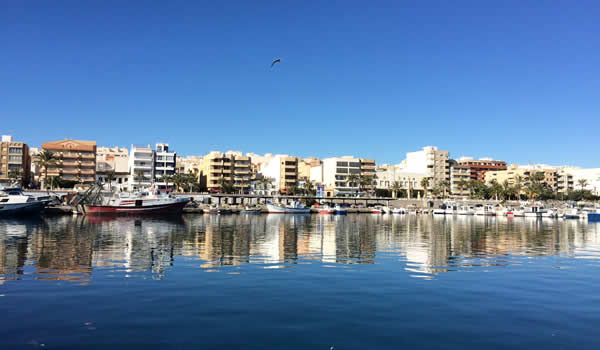 Originally a typical Spanish fishing village, Garrucha has evolved into a bustling town, renowned for its fine selection of fish restaurants, offering a variety of seafood freshly caught that same day! Market day on a Friday in Garrucha is a day out in itself, with hundreds of stalls selling locally made crafts, freshly farmed produce and a whole range of other necessities!

Garrucha which is minutes from Mojacar Playa, also boasts a golden sandy beach, with shower and toilet facilities, edged with a long promenade, dotted with cafes and bars. The Garrucha promenade makes a perfect early evening location to sit and enjoy the local hospitality whilst watching the local fishing boats arrive home. 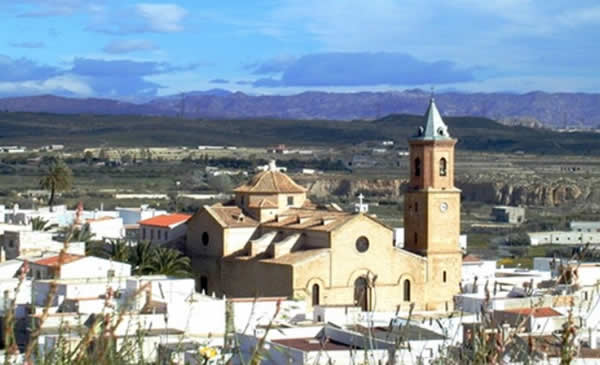 Just a short drive from Mojacar is the town of Turre with the stunning backdrop of the Sierra Cabrera mountains and surrounded by countryside. A growing selection of bars and restaurants offering local and International cuisine can be found along the main street and the town comes to life around the village square on market day.

Overlooking the town is the area of Agua Nueva with recently built luxury villas boasting private pools and stunning views of the coast and mountains. 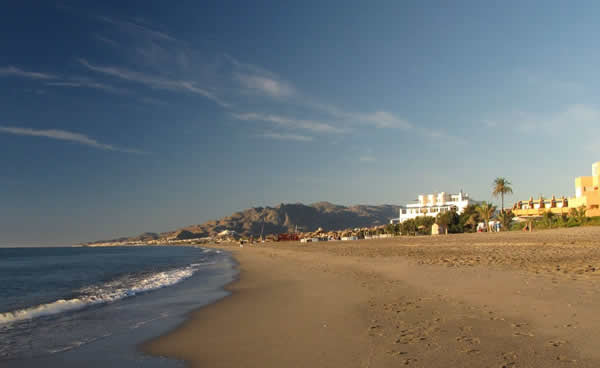 Vera Playa is home to 8 kilometres of white, sandy beaches boasting the European Blue Flag, offering shallow bathing, ideal for families of all ages. If you can drag yourself away from the beach, hours of fun can be spent at Vera’s Waterpark which offers a “splashtastic” selection of waterslides, wave pools and other attractions.

For the more adventurous, Vera also boasts the only “naturist beach” in the area which is clearly defined to the north of the beach area.

Close to the beach area is the recently opened sports centre offering a range of facilities including; golf driving range, paddle tennis, pitch and putt, gymnasium and café and restaurant.

Vera Town is a large vibrant area with a long history and rich heritage offering a taste of “real Spain”, with its impressive bullring, markets, shops and a typical Andalucian town square in the shadow of the imposing 16th century church. Recent years have seen regeneration of the old quarter and many of the older historical buildings, and with new cafes, bars and restaurants opening, Vera Town now provides some excellent dining options, some of which are noted in top Spanish Eating Guides.

Nestled on the lower slopes of the Sierra Filabres mountains, just 20 minutes from the coast are the villages of Bedar and El Pinar. El Pinar was originally a mining village and is now home to many luxury villas most with private pools, at the centre of the village is a popular bar and restaurant with large communal pool and due to open in the near future is the new commercial area. Slightly higher is the typical andalucian village of Bedar with a handful of shops, bars and restaurants, most of the villas are on the outskirts of the village and set in their own private grounds.